Last weekend, my father and I went to a three day photography workshop hosted by John Fielder. Fielder is considered to be one of the premier nature photographers in the US.

Took 4×4 vehicles to an area near Wolcott (west of Vail). From there, we snowshoed to a place called Bellyache Ridge. There were lots of nice aspen tree stands in the area.
One nice thing about shooting with an analog camera is lense selection. With a consumer digital device, wouldn’t be able to capture as large a field of view as with a 17mm focal length. 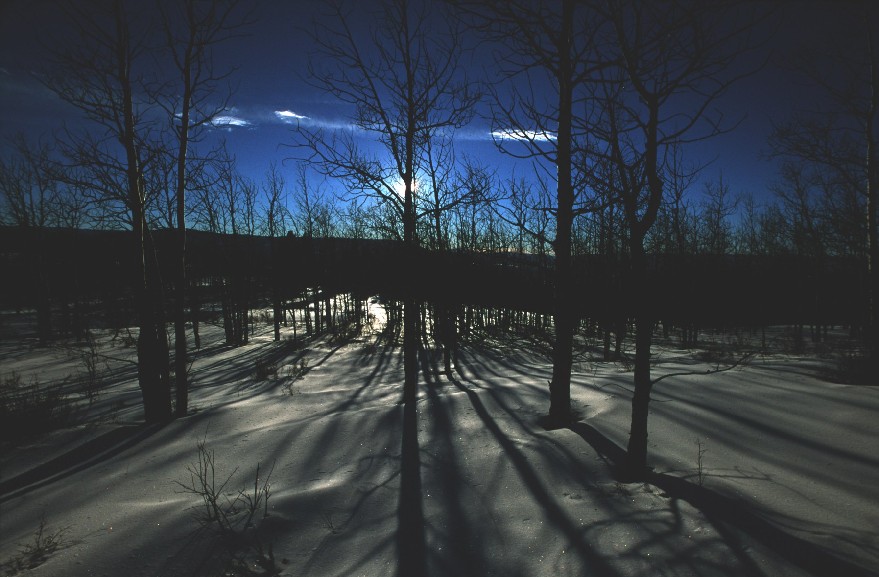 By default, a camera will automatically set the exposure time such that the average intensity across the whole image, as detected by the light meter, is equal to 18% gray. In bright white snowy conditions where the sun is reflecting off the ground, the camera can be fooled into underexposing an image. Oops. I didn’t learn until the second day to compensate a full stop in order to capture the details of darker objects surrounded by snow. Makes for nice silhouettes sometimes, though.

Took snowmobiles from Camp Hale on an eight mile journey to the top of Ptarmigan pass. Along the way, we traversed the valley floor on snowshoes to an old abandoned ranch. 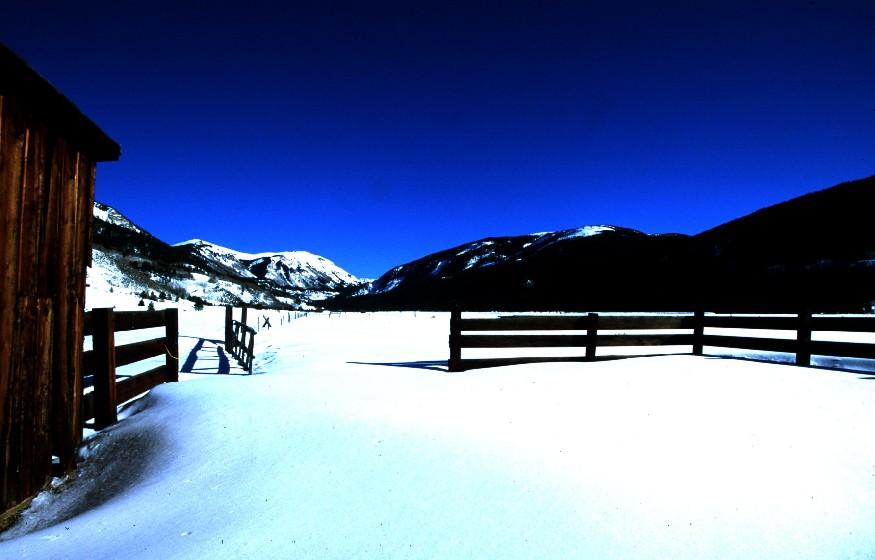 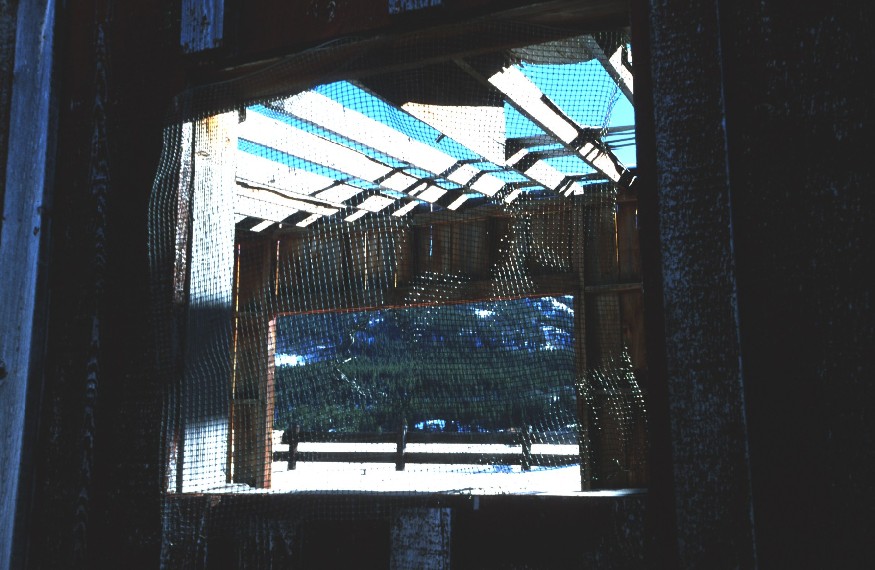 A couple of hours of narrow trails and switch backs on the snowmobiles, and we were near the top of Ptarmigan. The last 1/4 mile isn’t possible on the machines because the mountain ridge is too narrow to turn around.
From the top, there were awesome views of the surrounding ten mile range of mountains. Everybody (well, most everybody) was careful not to get too close to the cornice edge. Slide through, and it is a 2000 ft plunge to the valley floor. 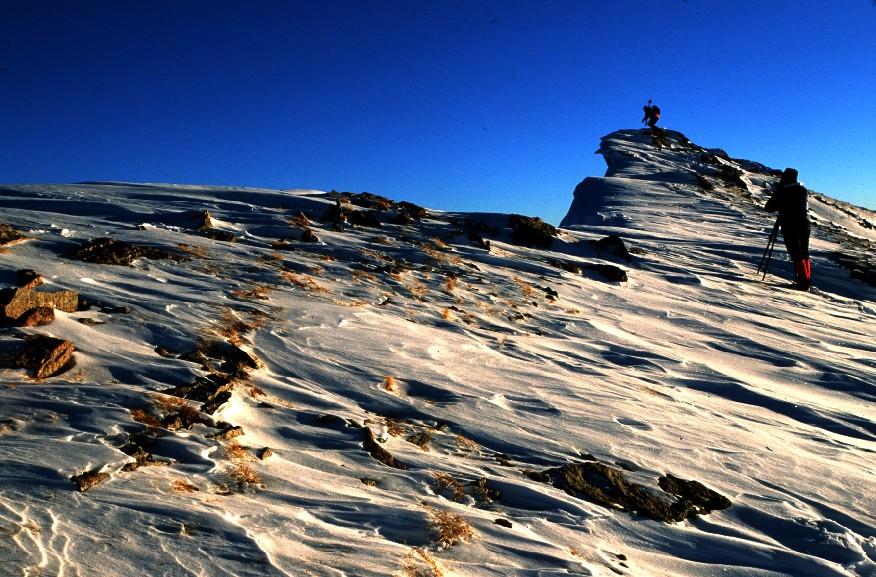 Night fell while we were still at the summit of Ptarmigan pass. At night at 12,500 ft, it gets cold fast! 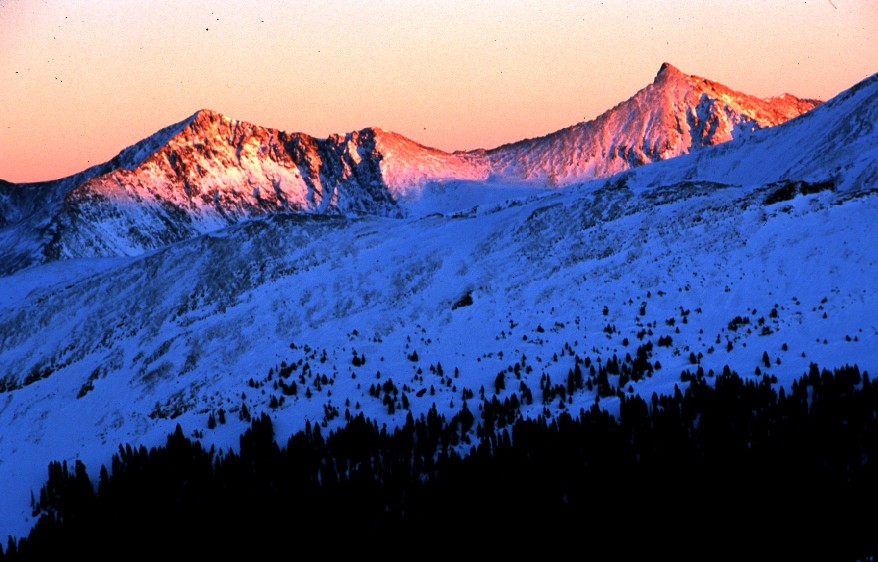 At below 0F degrees, film can become very brittle and even break. Unfortunately, that’s what happened to me while trying to rewind my Nikon FE. Fortunately, the film lab was able to take the camera body into the lab and extract the film in the dark room, recovering the photos. 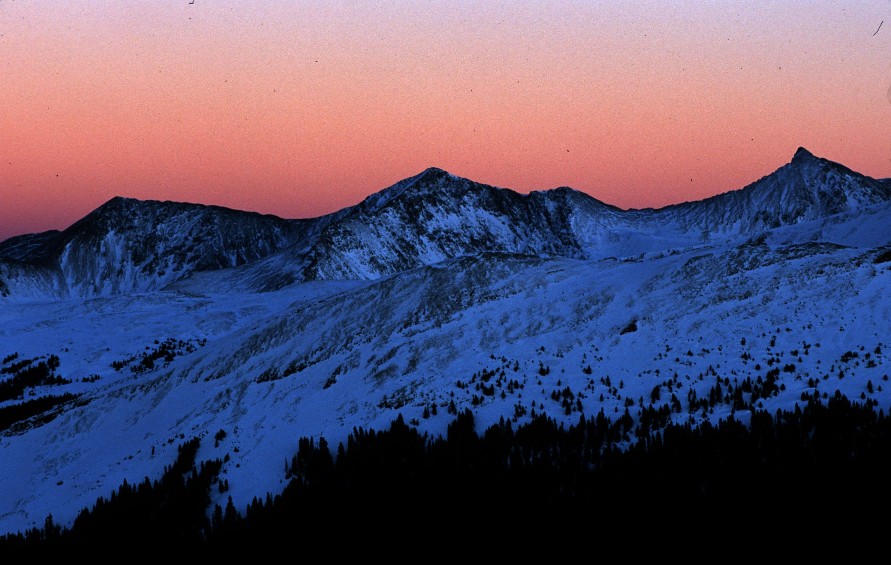 At extreme high altitude, a phenomenon known as the “shadow of the earth” is clearly visible. As the sun recedes, the colors of sunset are obscured along the the opposite (eastern) horizon by a dark band caused by the eclipsing of diffuse sunlight by the earth itself. To the east, ‘Sky’ mountain (where the avalanche chutes adjacent to Copper Mountain Ski resort appear to spell out the word sky) looks tiny in the distance. 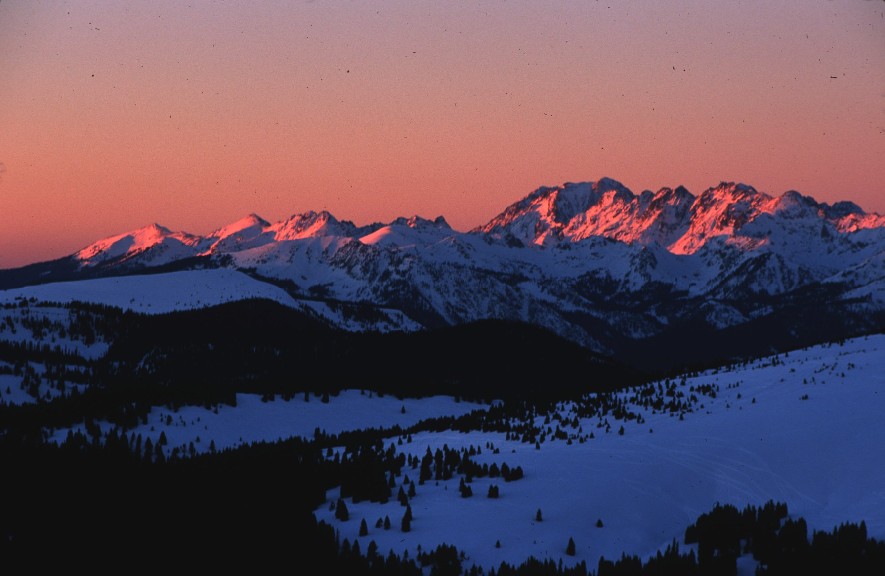 By changing the aperture of a lense to let in as little light as possible, the distance from one edge of the lense to the other where light traverses is minimized. This requires a longer exposure time, but makes it possible to take pictures with extreme depth of focus. Notice how exposed granite less than two feet away from the camera, as well as mountains peaks fifteen miles in the distance, are simultaneously in clear focus. 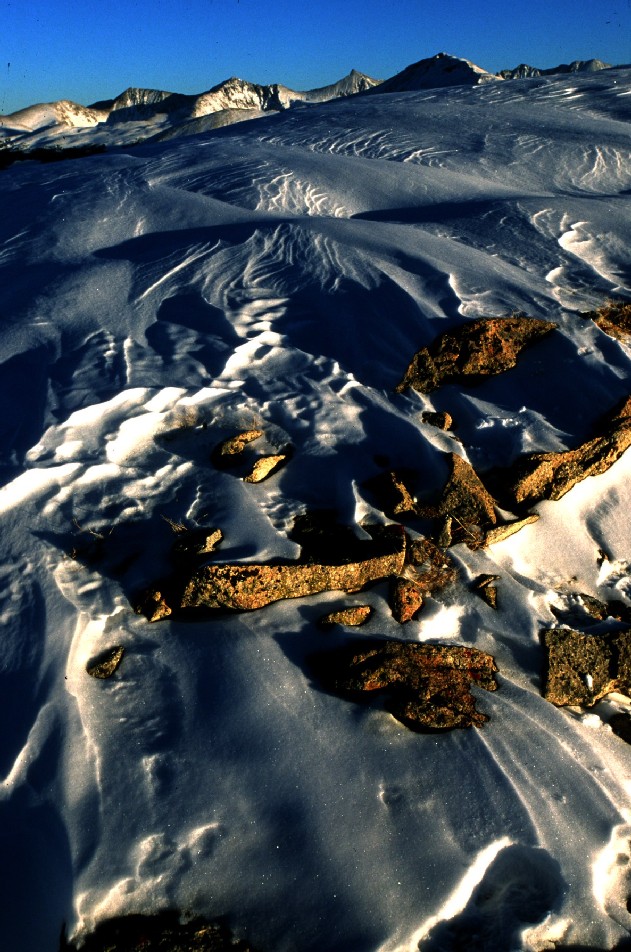 This effect seemed to work best before sunset, when it was possible to capture some color that highlighted the texture and patterns in the snow. 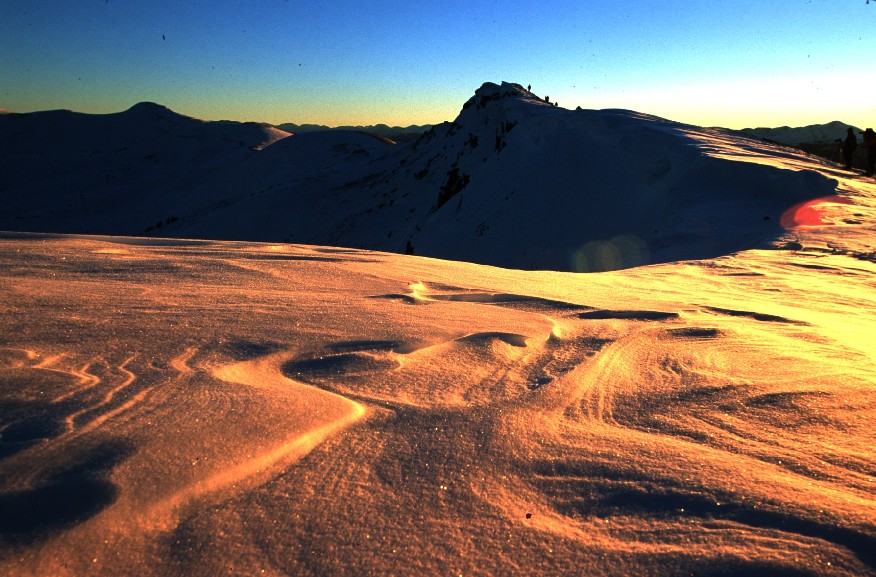 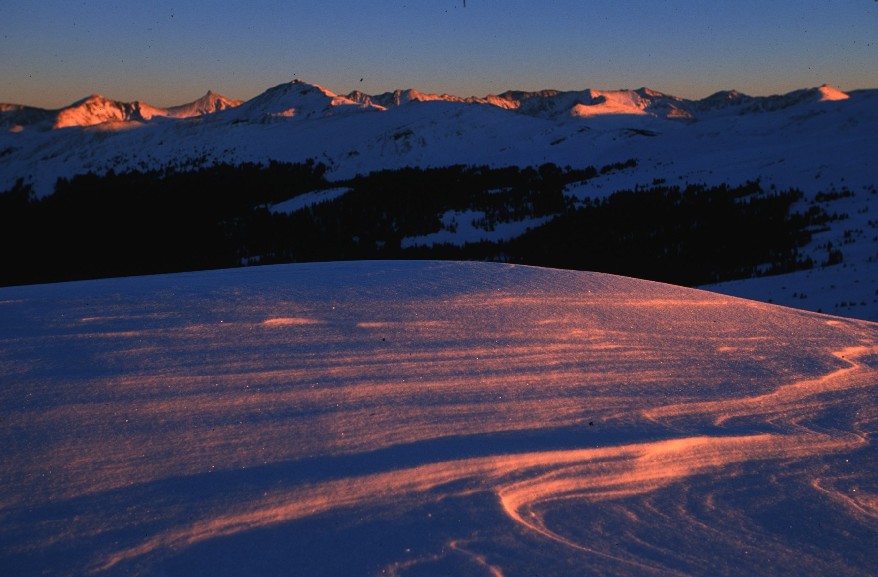 Half day hike on a walking trail near Vail.
The concept of “Intimite Landscapes” is about capturing interesting details in nature rather than always shooting for the grandiose scenes. I gave it a try, with some mixed results. 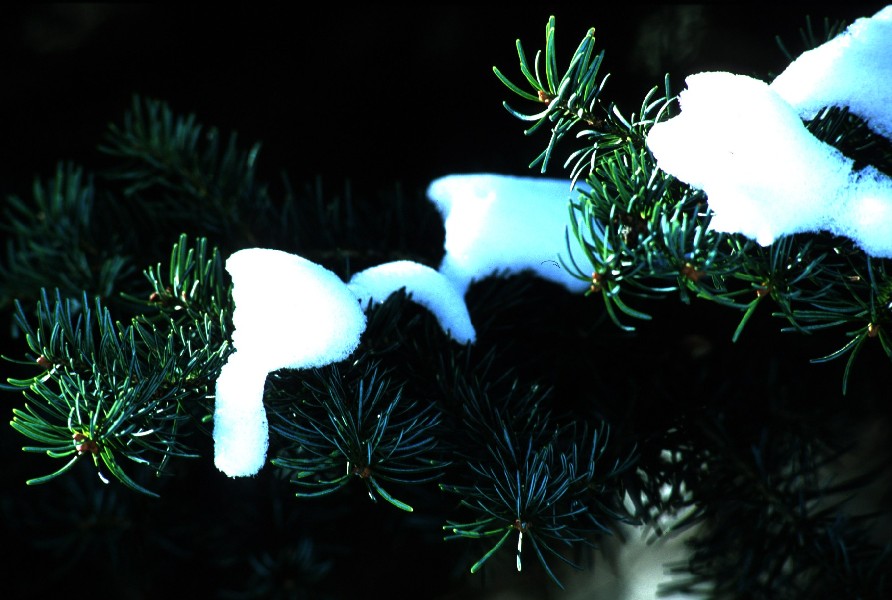 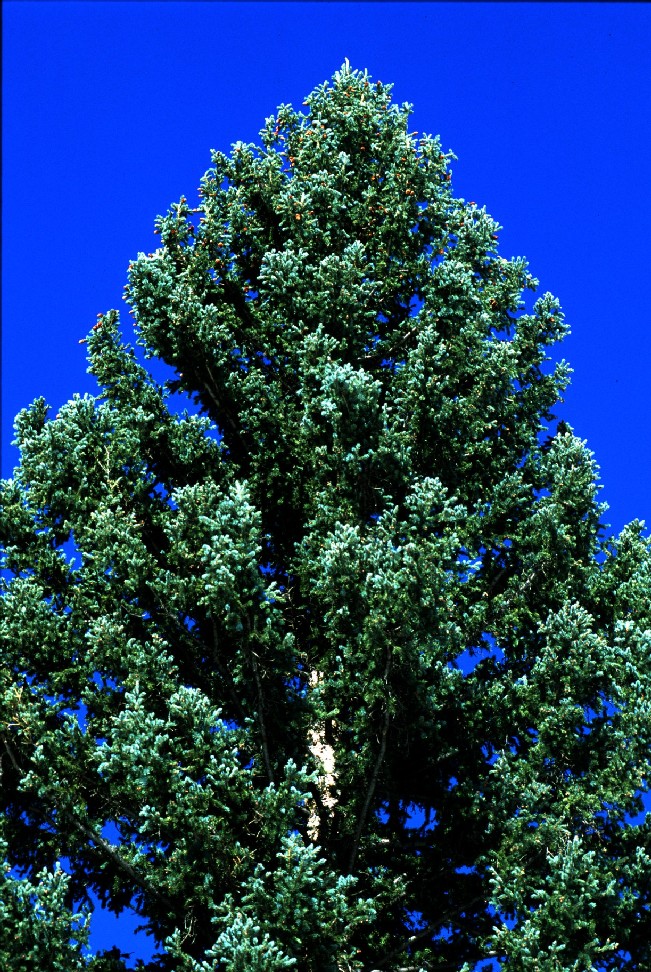