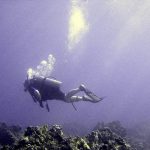 Dropped gear at staging area near beach. Prepped, checked and mounted equipment and proceeded to walk down stairs to beach area. At 8:24am, waded into light surf. Back on shore, saw several large dive groups of 8-10 people preparing for dives.

Approximately 200 meters offshore, the large coral reef tapers off into open sand. Encountered a team of two divers in this area, swimming north-east.

At this point, headed somewhat south and west, to the deepest point of the dive, approximately 40′.

Came across several turtles, one swimming high above us near the surface, and a group of three clustered on the coral.

Was utilizing a Canon WP-DC800 waterproof enclosure and Canon PowerShot S400 to take digital photos of the dive. Images are adjusted slightly to compensate for the blueish color cast and lack of contrast which occurs at depth.

Mid-point in the dive, the camera battery died, as I had forgotten to recharge since leaving Denver. At about this same time, Dave signalled to me that he wanted to borrow the camera. Not knowing the sign-language equivalent of “no, you can’t borrow it because the battery is dead”, I figured I’d give the camera to Dave and let him see for himself that it wasn’t working. Unfortunately, when he went to hand the camera back, it caught on his scuba mask, breaking the retaining clip and flooding the mask.

We worked for several minutes to secure the mask again, without the clip, but were unable to seal it well enough to prevent it from from continually flooding. This forced us to make a controlled ascent to the surface where we’d be able to work on the mask (see blue trace on dive map).

During this whole exercise, I lost track of the camera.

In ‘Scuba’ magazine, every issue has a real-life story about diving emergencies and accidents. Whenever I read those, it is easy to think “oh.. that will never happen to me”, or that the people featured in the article were just incredibly unlucky (or, sometimes, incompetent). But, at this point in the dive, I realized how easy it is for one minor problem to lead to another, and then how dealing with that problem can lead to another, and so on, until things spin out of control. Lucky for us, our problems weren’t serious. We violated slightly the prescribed safe ascent rate of 30fpm, ascending the last 20 feet in ~20s. (It is hard to be patient when you are under 40 feet of water and can only see two inches). Otherwise, we were in good shape. Unlike many of the people featured in those ‘Scuba’ articles, we weren’t dead.

One small problem remained… spotting floating objects from the surface isn’t easy, as the swells in the ocean are constantly moving both the viewer around and obscuring the surface at a distance. But, miraculously, after a little searching we were able to spot and recover the camera about 100 feet away.

With about 1500psi left and Dave’s mask tied back on, we descended again to the ocean floor and made a gradual ascent and swim back to shore (see red trace on dive map.)